I recently met a gentleman named Stephan on Goodreads.com. He shared with me a little

poem he wrote: Green eggs and Hamlet. He had an interesting concept, what would Shakespeare be like if Dr. Seuss were to write him? This was his take on what he could’ve written:

I do not like ova chartreuse anymore. I will not eat them in Elsinore.
I do not like the ghost of my dad. And mom sleeping with Uncle just makes me mad.
I do not like Ophelia like she likes me…
but don’t worry… Neither a borrower nor a lender will I be.
I do not like spying college friends R&G, I altered their letter so they met the fate meant for me.
I do not like invading Norwegian kings. I do not like so many things.
Though I did like Yorrick, now he’s dead.
Don’t offer me Juevos verde con jamón instead!

I really like what he did, it was very creative.  I mean, Green Eggs and Hamlet, that’s hilarious. But the most important part, and the possible Shakespeare teaching lesson from this that I see: Can we use this creative spin to get our kids to have fun with Shakespeare, so they see him and understand him better? 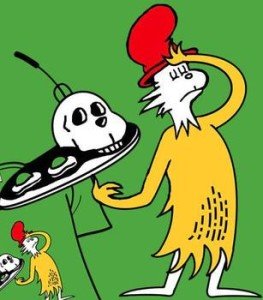 You never know, your student may write the next Go Macbeth, Go! or A Midsummer went by! or One Romeo, Two Juliet, Red Capulets, Blue Montagues!  I also think this should be by William Seussspeare, not Shakespeare!

What clever titles can you think of?

Can you find anything else out in cyberspace?

5 replies on “Green Eggs and Hamlet”

What a great connection! My daughter read Hamlet by Brendan Kelso over and over the first week she got the book and she loves Dr. Seuss too. I look forward to sharing this with her tonight!

This makes me think of the scene from the comedy “The Complete Works of William Shakespeare (Abridged)” where they refer to him as ‘Omelette, Cheese Danish” (which makes the line “something’s rotten in the state of Denmark” more humorous than intended)