That’s right, Hamlet, not Macbeth which I wrote about the other day. (did you find the 14 movie references in my crazy Macbeth version yet?) Well, as I said previously, I put this together for a 6th grade class as a kick off to performing a few of my melodramatic Shakespeare plays.

A few years ago, when I did a different solo Hamlet, I ended it with Hamlet talking to Claudius and saying, “you killed my father, prepare to die” in the best Inigo Montoya voice I could find.  As I was rehearsing again this year, the same line came up, but then I thought, “wouldn’t it be cool to do as many quotes as I could in one short version?”  So, I did.  See if you can find the 14 Hamlet movie references.  Have fun, I did!  Here are some clues: Star Wars, Princess Bride, and Clint Eastwood. 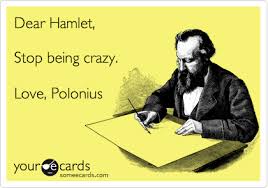 One reply on “Can you find the 14 Movie References in this 4-Min Hamlet?”