I just finished a five-week afterschool program doing Hamlet for Kids the melodramatic version. So, I thought I would list a few pointers to make this particular class more fun and melodramatic for you and your kids. 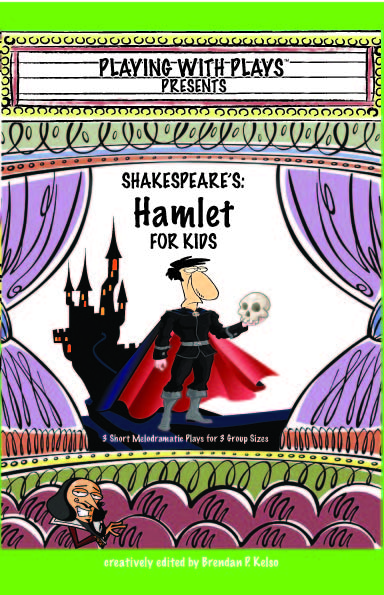 First of all, the funniest part of the entire play is the last scene, everybody dies onstage, every kid LOVES to die on stage melodramatically! Focus on having fun and getting this scene dialed in. It allows your play to end on a successful note as well as it is the funniest part of the play, and ties up teh story line. Also, when Hamlet chases Claudius in the last scene, have them run all around the audience, parents love this part!

Ophelia: have a lot of fun with her. One thing my actress did in this one is when she started acting crazy, she started saying ”butterflies” randomly in the back ground. It added a lot of humor, and she even put one in while Laertes was asking, “Who killed my father and why is my sister acting so… (Ophelia ”Butterflies”) loony.” Big laughs. And then when she dies, by drowning, she walked on stage and threw a cup of water in her face. Big laughs again.

Anyway, those were just some pointers to make this melodramatic version of Hamlet a lot more fun!

If you ever have ideas or suggestions of ways to improve my plays, I would love to hear and share them! In the meanwhile, break a leg!