Part 7 of the 12 part series: Why Drama is so important in School. – CONFIDENCE 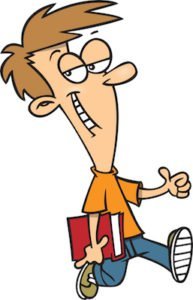 Confidence in children can be shattered so quickly and many times we don’t even know why. But, what we do know is that confidence can be built. Confidence can have an incredibly strong foundation for the future of a child, if nurtured correctly.

The DEFINITION of confidence: A feeling of self-assurance arising from one’s appreciation of one’s own abilities or qualities.

Let’s break that down – “self-assurance” and “one’s own abilities” – it’s about believing in yourself and your skills. The other key phrase to note here is “ARISING from one’s appreciation” – ARISING, or emerging or becoming apparent. This doesn’t JUST occur, it takes time, repetition.

That’s one of the great things that drama brings to the table – the ability to give you time to work on something until you feel confident enough to go in front of people to present it.  And only when those people appreciate what you have accomplished, whether it be your parents, director, peers, or whomever you deem important, does your confidence in your own abilities become a growing foundation for you to build on.

There’s a good reason many kids do more than one play. One of those reasons IS self-confidence and being proud of their work.

I directed a kid once, whose parents made him join one of my drama classes.  He said he wanted a small part because he was scared to go on stage and be embarrassed.  So I gave him a part with just 3 speaking lines, and a lot of opportunities to come on stage with no lines. (It was Treasure Island for Kids, pirates were always being killed on stage, and hey, kids LOVE to die on stage!)  He had so much fun with his peers, and he nailed his part and made the audience laugh. He came back to do five more of my plays over the next three years. Each time, getting a bigger and bigger part. Until yes, he got the part of Hamlet.

He quickly realized, as most seasoned actors do, “There are no small parts, just small actors”. In other words, even with no lines, his pirate “deaths” were AMAZING… and had the audience laughing every time. This laughter fueled his confidence.

There are no “small” parts just small actors – Constantin Stanislavski

This kid did not want to do drama because he was worried about what his friends would think of him. Once he realized that he could make them laugh, he came back for more. He is a very different kid today than the one who reluctantly came into my class three years ago. All, because of the continued growth in confidence he had in himself.

Having confidence in yourself and abilities to go in front of an audience, whether that is a group of peers, your class, your boss, or whoever, takes courage.

Another way to improve confidence is through improv. Practicing improvisation increases and builds confidence. As well as impromptu speaking skills which come in very handy at business meetings and social gatherings.

As we know, many adults have a fear of speaking, and the fact is it’s not the fear of speaking but rather the fear of making a fool of ones’ self in front of others, or not being believed. Much of this fear could have been curbed by doing drama when they were younger and giving them confidence in their abilities.

Drama is amazing for giving us life skills without even realizing it. These are the tools that we need to give our children so they can go on to be fabulous, independent, and confident adults.

The below data shows the development of oral communication skills

The Dramatization method of teaching oral communication increased 14.19 points or 28% – whereas the traditional method 2.79 points or 6% over the same time period.  That’s an increase of 22%! (the experiment was based over 14 weeks with groups of 32 kids each 50% M/F – 4th grade) 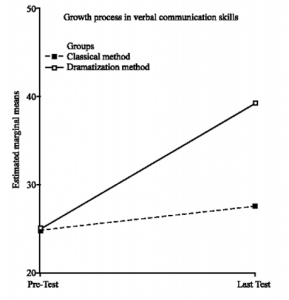 To learn more about all the positive aspects of drama in school, please see the article: Why Drama is so Important in School